Notice there’s no mention of the new Phoenix architecture in the plan. Also remember that several other companies (Hawtai included) were still interested in using it in their own vehicles and the ensuing clarification that was needed to separate out what IP BAIC owned vs. the new technology.

While this deal with Pang Da is very exciting (and possibly more so) for Saab’s long term prospects in China because it gives them a clearer equity stake in their fate in China than in the Hawtai deal, the Phoenix platform is still worth a lot of money that Saab could use to secure their long term financing. The question is– how much is that worth if it’s competing against Saab’s own joint-venture produced vehicles in China?

I’d argue that for the right company who lacks an adequate rival, it’s pretty huge. It’s clear that Victor’s biggest selling tool though was the Saab name and association, as he revealed to reporters in Washington last week.

That’s as close of an accurate as we can get to what tools Victor actually negotiated with in China this weekend. Hopefully he’s still there negotiating with Hawtai and Youngman (or others) about a potential sale of the Phoenix platform. The research by DI from the weekend that Saab was still in talks with Youngman should not be discounted, there’s a very real possibility that they’re still at work on a deal. Perhaps the “to-be-selected manufacturing partner” who will be assisting in the manufacturing of the MJV will not be so foreign to us after all.

I also see bigger opportunities in that MOU than in the Hawtai deal. The fact that the first money Saab is about to get is for Pang Da buying cars which should be sorted out quickly without any approval should help to get the factory up running again. So Saab has some time to sort out additional financing.

@Jeff: I wonder if you start some in depth research about Pang Da as you did with Hawtai or if you wait until the deal is confirmed… 😉

I had to laugh as so many commenters ripped into us to report on speculation over the past few days as I had spent so many hours of my week working on a piece about Hawtai that essentially fell apart. Let’s take a wait and see approach this time 😉

Btw, we made it into the Auto News First Shift webcast, 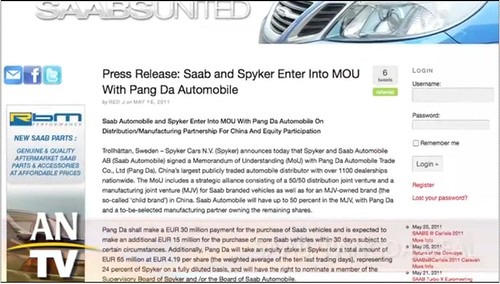 Absolutely right. The Pang Da deal surprised me by being a whole new take on the ‘China partner’ business. It leaves quite a lot of room for Saab to make more moves. Exciting, I am really stunned (once again) by the flexibility and creativeness of VM.

I do hope the manufacturing partner turns to be BAIC, to clear the obvious hurdle you’ve mentioned. This also means Saab gets a continued stream of money for further development of Epsilon-based platforms and a partner in the development of all-electric and hybrid versions. It is my understanding BAIC has very limited own engineering resources, but OTOH it is a very stable company financially, and one destined to be one of the centres of market consolidation by the Chinese authorities.

Right now this deal with Pang Da looks more profitable regarding Equity in Saab than the 29,9% of Convers Group or Hawtai proposals, doesn’t it? This should explain why Spyker has gone up this morning on the trade market…

good news read on TT: Eric Geer said that production in Mexico is fully subscribed for 2011.

Was it so that Saab is allocated 12500 cars this year? What if they were able to sell some 30K of them – would GM say that sorry no can do?

You can like him or not like him, trust him or not trust him. But no one, not even the worst sceptics, can deny that he’s an absolute genius at conjuring deals out of thin air at short notice. Hats off to VM! Hope the guy gets a bit of sleep at some point.

Maybe it’s time to upgrade him to The Muller, just like the car is (occasionally) known as The Saab? 🙂

In that case, it should read “The Muller Man” or just short TMM just like JåJ

Will margins be thinner on anything produced in Mexico since it is a GM plant?

GM must make some cash from it but I’m guessing this is made up for by the zero import taxes from mexico to the US? I think..

The Saab 9-4X:s sold in Sweden is likely to have good profit margins due to the favourable USD-SEK exchange rate at the moment. I think it is applicable to the rest of Europe too since I believe the USD-EUR exchange rate is quite favourable too. In the US the profit margin depends on GM:s pricing for the manufacturing of the car, but we currently don’t know how much that is.