In the last week news events were so big that it was convenient to present them in a single post each. But now it’s time to wait for the next big event, and the pieces of news are less important but not less interesting.

In Germany the Independence Edition Saab 9-3 Convertibles have landed. At least the German Saab Blog Saabblog.net reports about it.

I know they are based in the Frankfurt area, where Saab Germany has its offices, so they should know.


And because TimR has posted on the 9-3 IE of Mr. Antonov, I will also not only talk about Saab IE but also about Mr. Antonov.

Reuters has spoken to Mr Antonov, and he still wants to acquire 30% of Swedish Automobile NV.

He also says that the new (planned) shareholders, Pang Da and Youngman, haven’t changed his mind in investing in Saab.
He also sees many ways to own up to 30% of the shares.

“There are various options to become a shareholder. You can buy new shares or old ones. It depends how you invest into the company — as equity or debt,”

The Saab Museum has made some changes lately, they have not only reordered the cars, but they have also added 10-15 new cars to the museum.

There are some historical new entries to the museum like the 9-7x or the 9-2x. But also, for the more interested fans, they have some very rare cars like the other Saabaru, the 9-6. Yes the 9-6 had no X in the Name.

They also explain a little bit the plans on that model.

I don’t know you, but I would go to Trollhättan if I could. 🙁

(Thanks to Jukka for the pictures.)
—

In Formula 1 you can get a similar graph after every race, showing how the drivers have swapped the places from the first round to the last. Well this is similar but showing the evolution of the different markets, as of absolute registered units, for the first 5 months of 2011.

The order of the legend is the same as of January.

Not even Nostradamus got everything right, but there are still some sites that think that they can predict the future.

A site called 24/7 Wall St. says that the brand Saab will disappear by 2012. They talk about the car company and forget that the brand is shared by two companies.

They also state that Nokia and SonyEricsson will disappear by 2012, which I can’t imagine to happen.

To show that sometimes they are (somehow) right, they use the case of T-Mobile. Last year they predicted that T-Mobile would disappear, and they are right, albeit only in the US-Market (pending FCC approval of their AT&T merger). T-Mobile is still big in Europe.

On the other side brands like Kia, Moody’s and BP are still here, although they should have disappeared in 2011, as 24/7 Wall St. predicted those companies to disappear in 2011. 😉

I’ve said it already many times, those Brits, they love their Saabs. And some of them even go to Trollhättan to read their favourite Newspaper. 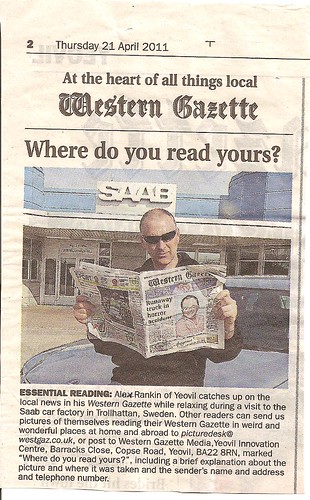 They are so eccentric, and still we, continental Europeans, love them.

Holy crow, that 9-6 looks terrible! It looks worse than the B9 Tribeca! WAAAAY too busy to be a true Saab design. It actually partially resembles my mom’s Outback, sadly…

It must have been a relief for the Saab management when Fuji Industries and GM went apart. 😉

It’s good to see these rare cars in the museum. I know some don’t like them but it’s all part of the history, Well done Peter. I wish I could afford to fly in to see them.
Great graph Red, love it.
Robin.

Only because the yellow line is on top. 😉

I was at the Saabmuseum just two weeks ago. None of those cars were there then.
Darn!

Same with me, while I was there last week. But they were definitely preparing for something, and Peter Bäckström looked pretty busy.

Which country shows the most dramatic climb, Australia of course!

And which country is most impressive, well Belgium of course!! Only a postage stamp big but ranked 4th!