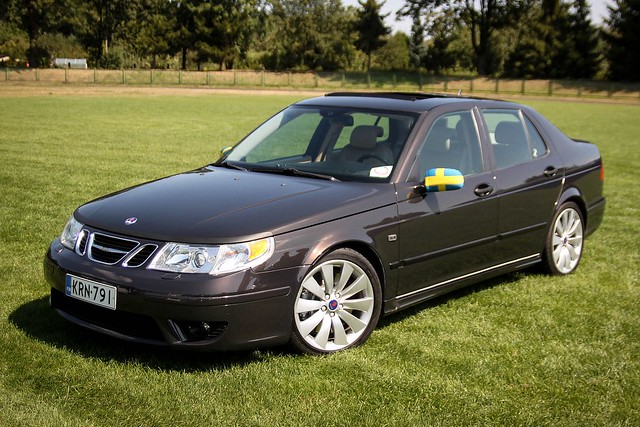 More than two hundred cars, around four hundred participants – these numbers sum up the annual international meeting of the fans, users and lovers of Saab cars.
This year’s event, held from 8th to 10th August, was organized by Saab Club of Poland and the designated location was Malbork – a town in the Pomerania region, home to the largest European medieval brick castle.
The participants came from all over Europe. The largest representation came from Sweden and Germany, there were quite a few drivers from the UK, but there have been also guests from more exotic destinations. The brave travelers included Carlos from Catalonia who drove by himself all the 2500 kilometers from Barcelona; Ægir from Iceland, who came with his leg in a cast, so eager was he to meet other Saab-maniacs, as well as Valery from as far as Moscow, owner of a beautifully decorated 9-3 Sport Combi. The meeting’s sensation were the visitors from New Zealand – unfortunately, they did not bring their own Saab, but a rental Peugeot proudly decorated with the “Saab Club Down Under” insignia. Many participants voted for this car in the “custom” class during the Sunday beauty contest.

Friday started with a slight impediment – the town authorities promised that the freshly renovated Parkowa street leading along the castle moat right down to the sports and leisure center where the meeting was held would be open for traffic. It was indeed, but the road was blocked by a huge construction crane, which came to put up the stage for the town’s Saturday event. Fortunately, the rapidly organized “rescue missions” brought all the lost drivers to the camping site and we were able to really get the party going.

The two hundred beautiful cars, parked on the grass sports field, looked really impressive. Almost all models were represented – from the oldest two-strokes from the early 1960s right down to the latest 9-5 NGs. Their owners – after the official welcome by the representatives of Saab Club of Poland – engaged in entertainment, meeting new friends and sampling Polish food, quite exotic for many of them. 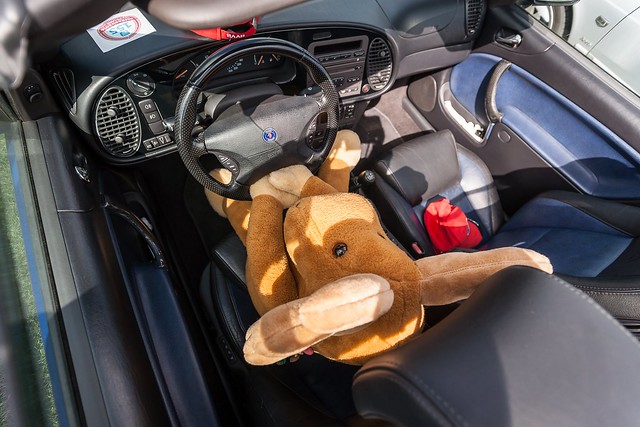 Saturday was a day full of attractions. The parts market – attractive especially for owners of the older, historical Saabs – opened early in the morning. Many people were interested in the stand of Neo Brothers, a well-known British tuning company. This time, aside from offering technical advice, the Brothers have brought lots of Saab gadgets for sale.
The Viggen Auto stand offered technical advice and even computer checkups for the younger vehicles.

At high noon a convoy of around 30 cars, led by a vehicle of the Municipal Guard, paraded across the center of Malbork, among viewers of the Magic Malbork city show and parked at the entrance to the castle. There, the tourists and locals alike could admire and photograph the cars, asking their owners about various details. The most popular ones were the beautifully restored “oldtimers” and two intensely yellow Monte Carlo convertibles.
The afternoon meeting with Simo Lampinen, the famous Finnish rally driver, multiple participant and winner of the 1000 Lakes Rally, was the highlight of the day for most of us.
The foreign visitors happily engaged in the tourist activities – the specially prepared route for amateurs of sight-seeing from behind the wheel and the ship cruises on the river Nogat, with splendid views of the castle. Staged duels and fights of knights in full armor were met with awe, and the night sightseeing of the castle made an exceptional impression. 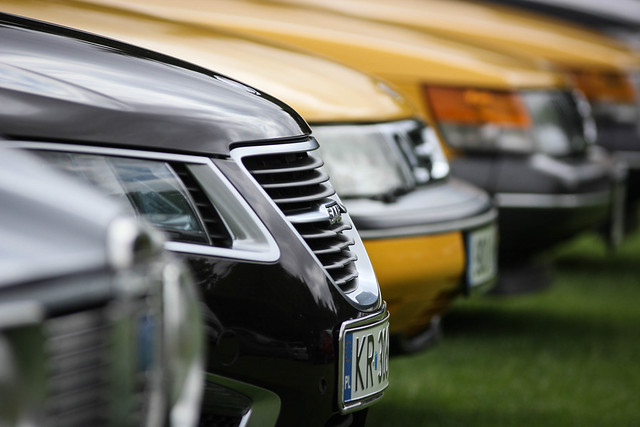 Sunday was the beauty contest day. Most of the participants decided to clean their cars thoroughly before that event, using the services of the on-site mobile steam cleaning service. All the Saabs, some of them clustered in “age groups”, shone and sparkled in the sunshine. The Car of the Event title went to the beautifully restored firetruck red SAAB 95, owned by Hans Johnsson from Sweden. It stood out from the rest not only due to its great technical condition, but also thanks to its owners loving care and the provision of such details as a child safety seat from the 1960s, fixed on the rear seat.
After the presentation of the prizes, everybody could get a photo of Simo Lampinen with his autograph. The meeting ended with a Polish-style afternoon snack – dumplings filled with fresh fruit.
The goodbyes took a long, long time. Some of the guests stayed until Monday, but most of them set out on the road back home. 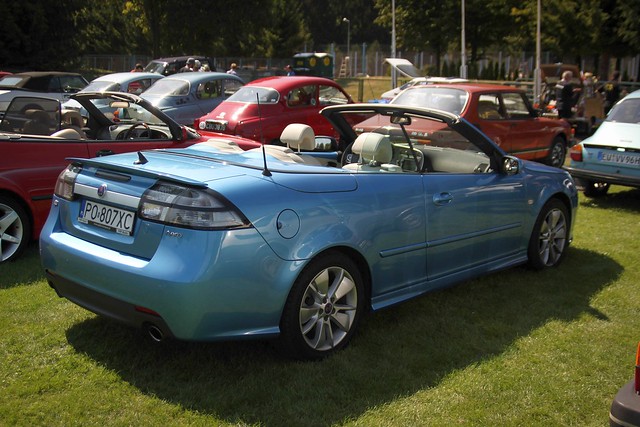 Please click here for many more photographs and videos.

Thanks for sharing Robin.

Sorry to have missed this, even more so after reading the report.
TTFN