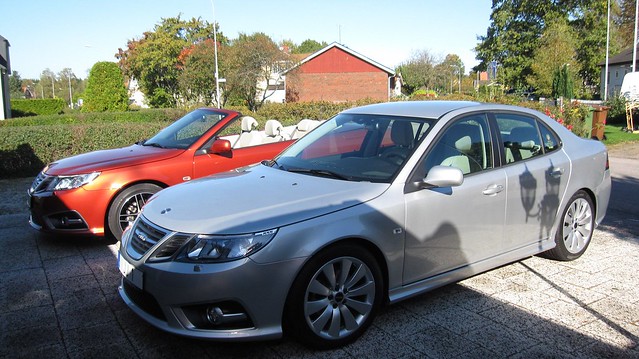 In April this year, a number of car dealers in Sweden got the first new Saab cars for their showrooms and for test driving. But the situation changed at Nevs, and I think some dealers are tired of waiting for Nevs to start production again, so they are now selling these cars at a discount. I decided to replace my 2011 9-3 SS Vector, and a couple of weeks ago, I found one of these cars, driven 1000 kilometers, and I bought it at a good discount.
I send you some pictures, where you can also see the Sotw from April 19, 2013, my 2012 9-3 Convertible Independence Edition.

Now I am just waiting for a miracle to happen, so I can continue working. I started working for Nevs in January this year, but had to leave in June, when all consultants were dismissed. I am 65 now, so if no more job at Nevs, I will retire. 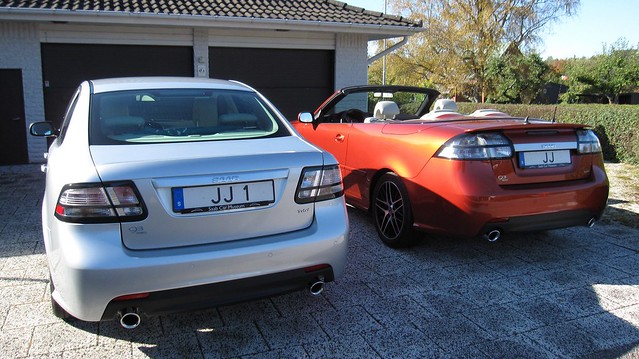 Thank you very much JJ, as always there are a few extra pictures here.

thank you so much for sharing the pictures of your beautiful cars ! I’ll keep my fingers crossed for NEVS to get a new investor and especially for YOU to keep your job and to retire at a time of your own choice. All the best for you from Germany ! Michael

Hope you are called back to work soon. Nice rides!

Love the plates, too.

Off topic – but what happened to the model-specific message boards? There was some useful activity for those of us with NG 9-5/9-4s.

Dynamic duo 🙂
Great cars! I wish I could get a petrol one but no petrol 9-3 sold post 2007 around here …I guess I can always get one in Sweden 🙂

nice cars – which engine and transmission have you’re Independence? And what number?

Sorry to hear you were one of the affected unfortunates at NEVS. I hope they can secure some sort of future soon for people like yourself. I hope you are able to get back to work again soon! Anyway to the cars. Congratulations on your latest purchase. I would have loved to have been able to buy a NEVS 93 but sadly they weren’t selling them in our market here in the UK. But then I prefer diesel. I just love how my TTiD drives. It’s the best car I’ve owned so far and I won’t trade it for anything… Read more »

What a nice couple. Congratulations, Johnny with these purchases.