Phil’s passion for Saabs follows him across the Atlantic. 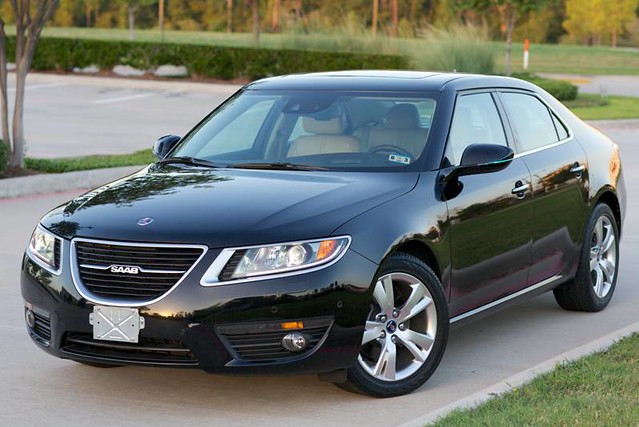 Hi Robin,
Please find attached a picture of my current SAAB collection, comprising a 2003 9-5 Aero Combi, a 2011 9-5 NG BioPower and a 2002 9-3 SE HOT Convertible. SAABs are rare in Texas in general and Houston is no exception, compared to states on the Eastern and Western seaboards and the mountain states. While the high heats of our summer seasons can affect the car’s interior, there are no issues with salt corrosion so the cars’ paintwork and general condition remain great even after many years. My history (addiction?) with SAAB started while i was still in Europe in the eighties and nineties, and continued after my work took me to the USA in 2002. My 14th SAAB, the 9-5 NG, is amazing, there are less than 10 of them in the whole Houston area (over 5 million inhabitants) so it gets many looks and wows for roomy interior, remote start and of course the HUD feature.
The 2002 9-3 SE Convertible was my first car bought on arriving in the USA, new off the lot of a struggling dealership. I had owned 8 SAABs from 82 through 2002 in Europe, so the salesman did not have to make a big effort to get me in the car. It is still going strong today with 154,000 miles. My wife bought the 2003 Aero Wagon from my SAAB shop in Houston in 2010, and 40,000 miles later it still goes like a bomb.

The search for Saab number 14 in the summer of 2012 took almost 3 months. The few ex-GM dealerships in Houston with some relation to past SAAB business did not sell many if any 2010-2011 9-5s, and this car was certainly never seen on the roads around here. I wanted a model with HUD, the most defining aeronautical feature of this most remarkable car, and numerous candidate vehicles were considered as far as New Hampshire (2,000 miles away) without success, before finding on sale in Minnesota cars, including this one, that had been company vehicles for SAAB USA employees, and thus taken off the road in 2011 when the bankruptcy was concluded. This model had less than 6,000 miles, a 4-cylinder BioPower dual fuel engine and all the technology options except the DVD package. The car has 35,000 miles today, impeccably maintained by Swedish mechanic Tomas Larson at Texas Automotive Performance. The car gets compliments from many car aficionados driving German and Japanese premium brands, and there are clear signs of envy when the HUD is lit up.

A line up I’d like outside my house. Thank you for sharing. A few more pictures can be found on my flickr page

That is a most impressive track record of Saab ownership and loyalty! An equally impressive picture too, that line up could have been used in a Saab advertisement, well done Phil.

Family members have other choice words such as addict 🙂

Yes, but I bet they don’t ‘get’ the SAAB bug that afflicts us all!

It’s nice to see people holding onto there Saabs.