It has come to the knowledge of SU that the SaabInt16 meeting in Vadstena has made a lot of Swedish SAAB entusiasts upset. The reasons why is primarily that the Swedish SAAB Clubs members are not invited to participate in the event. Club members can get limited access by working for the event organization and get a T-shirt basically. The cost for the meeting is set to 150 EUROS a sum that no previous SAAB meeting has reached up to. One wonders what could cost so much. I have spoken to some Swedish SAAB enthusiasts and collectors and they do not feel invited and are not going to participate at all. This obvious exclusion of Swedish SAAB people is worrying. One guy called me and said the only reason now to be a member is the get the special old-timer insurance through MHRF. I feel sorry for the prospective international visitors who will come to sweden and will not get to meet with so many swedes as they have used to do at previous SAAB meetings in our country.

An intersting alternative for swedish and foreign SAAB enthusiasts would be to gather in Trollhättan on the extended weekend of june 5-6. This is an interesting weekend since the 6th is the Swedish National Day. But not only that but also the BIG national automotive celebration day. Virtually every car club in sweden is engaged in some activities this day.

The Saab Club is no exception. This year they will join forces with the Volvo Club in a really nice activity. It all starts at 09:00 with a gathering at the SAAB car museum in Trollhättan. Around 11:00 the drive / rally starts with the finish at the Volvo Museum in Gothenburg /Göteborg a 1-2 hour drive depending on what activities are on the road. The cost for this event is 200 SEK. I visualize that foreign Saab enthusiast without a car can ride “shotgun” with fellow Swedish Saabpeople who would gladly share some space in their cars and split the fuel bill. When the meeting is over in Gothenburg I would guess a lot of Saabers will head back to Trollhättan. This day would certainly be a memorable day for an Saab enthusiasts. Saabs and Volvos in a shared event on the National day with flags  parades etc. Besides that it is usually good weather and the nights are bright and short.

If this sounds like a good idea I bet we could arrange a meeting at the Saab Car Museum on the day before Sunday the 5th. Just a nice gathering with cars and possibly a trunk/swap meet.

This is an idea that could be done without a BIG organization and lots of money. It is just about on the day 2 months to the day. So what do You think? SAAB Car Museum in Trollhättan and my ex.TX https://youtu.be/uANVG_2mQnQ
I recently stumbled upon a clip on facebook with a Saab 9–5 wagon that stood out from the crowd.
This Saab 9–5 2.0 wagon may look ordinary if it would drive past you during the day, but when darkness settles on the evening and the trunk lid is opened, this car turns into exactly what it’s called, – a #turbopartysaab. With it’s RGB LED bars pulsating in different colors, glowrope LED door inserts, smoke machine, PA speaker with 15″ subwoofer, – it turns this car into a party on four wheels.
Kenneth, the owner of this car, will cruise around on the Swedish roads with his party saab this summer and spread his joy and music around wherever he’ll go. Enjoy! Due to the sour attitude among some of our readers I cross out the text on my initial thoughts on the XC 90. It was no comprehenisve Road & Track test. Just what I could see and feel after a 5 minutes sitting in the car. I described what I could see from a Human Factors / Decision making and some haptics. I know that field of technology.

One of my favorite comedians, Jerry Seinfeld, has for the past few years been heading up his own little web-tv show where he is inviting various colleagues for a ride in an interesting car and a cup of coffee.

And, in season five, they finally feature a proper car: A two stroke Monte Carlo 850. I wonder if we will see Jerry return with a black 900 one of these days? Black Saab rules!

My favorite US radio program CarTalk has lost one of the two Magliozzi brothers Tom and Ray. Tom just recently passed away in Alzheimers disease.
The two brothers has given me so many hours of great car talk. Any brand and owners are helped or roast by the two guys.
I remember most clearly a guy with a SAAB 99 calling in to the programme. The issue with the 99 was explained something like this. “In sweden it is dark most of the year and the workers in Trollhättan happened to mount the engine on top of the gearbox and to add more issues the put it in the wrong way with the clutch just behind the radiator” I had a great laugh. It seams like quite a few of callers where from the east coast and drove cars like Volvo, Saab or european cars.

Here is one on 900 with an exploding muffler:
Dear Tom and Ray:
What would cause a muffler to explode? We just had work done on our ’93 Saab 900S. It was running very sluggish up hills, and diagnostics showed several leaks in the exhaust pipes leading out of the catalytic converter. After having a new converter and pipes installed, the car was better, but still a little sluggish. Within a week, we were accelerating to get on a highway, and the muffler exploded. It literally burst open along the side. What kind of pressure would cause this, and should our mechanic have picked up on a muffler problem in the first place? — Angela

RAY: Well, here’s the key question, Angela: After the muffler exploded, did the car run better?

TOM: If so, the muffler might have been the source of the sluggishness. Often what happens is that when a catalytic converter fails, its innards disintegrate and get pushed farther down the exhaust system, where they can lodge in the muffler baffles and plug it up.

RAY: That would cause exactly the symptoms you describe — the car would be sluggish when climbing hills or accelerating. If the tailpipe is blocked and the engine’s exhaust can’t get out, the fresh fuel and air have no room to come in, so the engine bogs down.

TOM: So both your catalytic converter AND muffler might have been clogged. And when your mechanic replaced the converter, the acceleration improved a little bit, but the pressure on the muffler multiplied. At some point, the pressure got to be too much and the muffler burst at its weakest point — the seam.

RAY: While that makes you unwelcome in most bedroom communities after dark, it also allows the exhaust to escape. So the car should run better. And once you replace the muffler, you should be all set.

TOM: Mufflers sometimes explode due to backfires, caused by too much unburned fuel in the exhaust system. But given all the corroborating symptoms you have, I’m betting yours was just badly clogged. Next time, try Mufflermucil.

Or listen to the library of great old shows like the one with:
– How many rocks can you fit into a Saab? http://www.cartalk.com/content/0729-sorry-dad-i-blew-your-car

The following story is not Saab related but it arrived in my in box and I wanted to share it with you and then ask,,, What’s the longest you have owned a Saab? Me, well we have had our black 9-5 Aero Estate for 11 years, so far.

Allen, of Springfield, Massachusetts received this 1928 Rolls-Royce Piccadilly-P1 Roadster from his father, brand new —– as a graduation gift in 1928.

He drove it until his death last year…..at the age of 102  !He was the oldest living owner of a car that was purchased new. 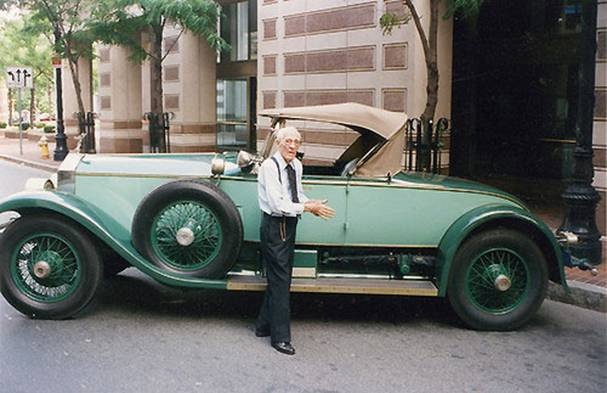 It was donated to a Springfield museum after his death.

It has 170,000 miles on it, still runs like a Swiss watch, dead silent at any speed, and is in perfect cosmetic condition.

Relationship? It may sound strange. But if you really think about it, that’s exactly what we have, a relationship. The thought struck me today during my visit at the Veteran market in Nossebro (Essunga, Sweden). I found myself in a frantic tunnel  vision, I was so busy searching  after everything that had something  to do with Saab (occurs very often). To society, the Veteran market is a market full of classic cars, moped parts, car parts and nostalgic stuff. I had to stop myself when I realized my eyes searched through the area to see how many Saabs I could find in place. And that overwhelming feeling of joy when I laid my eyes on a Saab got me thinking.

I don’t know if I’m slightly insane who feels this way, but isn’t the honest truth that we actually do have a relationship with Saab? Through the years, we’ve been standing united side by side through success, setbacks, sorrow, joy, disappointment, hope and promises. The feeling that always consists is the joy and pride among the people, the will to preserve the history of Saab, the passion, the cars and the feelings. The whole deal is pretty amazing, in my opinion it is very much like a relationship.

To me, Saab has been very rewarding in many ways, I’ve met many like-minded friends (including my soulmate), I’ve gained a new perspective on things in life. And the things Saab enthusiasts have in common is the passion, the fire that has been kept alive for so many years. I admire the enthusiasm and strength among the Saab people, the fighting spirit, the soul within the cars, the link between the car and driver, and the story behind it. And I am forever grateful for everything Saab has giving me and continues to give, and I know that I am not the only one who feels this way.

Tim is at this moment heading for Trollhättan to talk to representatives from NEVS. Feel free to ask your questions in the comments section and we will do our best to get answers.