Despite the mess that Saab has been in these past few months, things at spinoff company e-AAM, a joint venture between Saab engineers and American Axle, are ramping up. They’re increasing their office space at Innovatum Office Park in Trollhättan, and are one of the ten largest employers in the city.

Read moree-AAM is Charged Up

UPDATE at the end

“It can’t be more fun than this in a car – at least with your pants on. Trust us!”

then he belongs to the lucky ones. 🙂 Pär Brandt from the Swedish car-magazine auto motor & sport was one of those few lucky people that have been able to test e-AAM’s new electric 4WD system.

The e-AAM guys have posted three new videos on youtube demonstrating among other things torque vectoring and climbing a steep hill.

It looks like the new system is coming along nicely. I can see certain similarities with the 9-5 XWD navigating through those bends.

Videolist embedded after the jump.

As we already know, the next 9-3 will be available with e-AAM’s new eXWD setup. Up until now we’ve been told that it works in conjunction with the 1.6L engine from BMW to achieve somewhere between 220-240HP combined during temporary boosts. As we’ve seen in videos, the electric motor’s high torque helps with difficult traction situations, and its torque vectoring keeps you going in the direction you want. What we haven’t yet heard (correct me if I’m wrong) is that it will be available with the current 2.8L V6. An article over at thedetroitbureau.com claims this, and they say they’ve heard this directly from senior Saab officials.

Aaaarrghhhh that was a long trip. Tim has turned off the fasten your reload icon and everyone is free to comment about the site. Hopefully the server enjoys the naturally cooler temperatures and we can proceed as normal from here on out (although I did notice the toilets flush differently on this side of the globe). All kidding aside, as sad as it is to not be able to check a site located on the opposite side of the earth to most of us, it’s great that our community has migrated just as the company it loves has, home to Trollhättan, Sweden. This is going to be a very exciting ride, and we have been talking behind the scenes about some really fantastic upgrades in the future that should make it even easier for all of us to communicate and stay up to date on all the insider news we’ve come to expect from Swade. On to the snippets–

Saab has made some incredible strides these past few months in lowering their breakeven point not only through leaner operations, but by forming partnerships with established leaders in the business.

We’re familiar with BMW and their 1.6L engine Saab will be using in the next 9-3.

We know all about the joint venture with American Axle to build eXWM hybrid rear axles.

Last week, we learned that one of the most respected automotive suppliers in the world who works with the biggest names in the business (think BMW, Audi, Porsche…Bugatti), ZF Friedrichshafen will work with Saab jointly at ZF Sverige AB to produce advanced front sub-frames and complete rear axles for the new 9-3.

(ZF is also used in the 9-5 with the CDC damping system dual-mass flywheel and clutch).

This week, ttela.se posted an article about Vicura (english translation) the recently formed company made up of former Saab engineers, that we haven’t heard much about lately. They provide a quick glimpse and interview at how competitive this new company will be when it comes to delivering low cost, ultra efficient, and fast paced solutions– they can do in months what takes some companies years because of their experience and computer modeling workflow. An excellent read, and we’ll be working on getting more information if possible directly from Vicura in an interview piece soon. I’ll be eager to hear what their thoughts and ideas are regarding hybrid and electric drivetrains, seeing they’re behind the single-speed transmission being used in the new Saab ePower.

While we’ve heard a lot about what IQon is and when we’ll be able to use it in our shiny new 9-3s next year, we haven’t discussed the team working on it too much here. For this new system, Saab has partnered with Cybercom, the IT company that makes solutions for a wide variety of uses from online banking solutions to digital music software for the worlds largest mobile phone operator, China Mobile. While their name may make them sound like a front to Dr. Evil’s secret Volcano compound (I forget, maybe it was Robocom or Decepticom), they’re actually a Malmö based company established in designing and maintaining integrated technology solutions. The good news is they’re actively engaged and established in the app world on both iOS and Android platforms (here’s a safety app they’ve been partnering on for example), and while they’re focused on the Mobile Application management side of the equation (software), they also have hardware reference designs ready to go to speed the IQon software into reality. While there’s still plenty of work left to do, Saab’s timeline of 18 months suddenly sounds very doable after learning more about Cybercom. This is another company we’re eagerly interested in talking with in addition to Johan Formgren, Head of Saab Aftersales and commercial project leader for IQon. While I’m very excited about the prospects of IQon, I’m also very concerned about interoperability issues, driver distraction, the app ecosystem, and carrier/network plans just to name a few. Maybe (hopefully) by listening to our community’s concerns we might be able to help Saab engineers and Cybercom programmers streamline and enhance this piece of technology we all will probably encounter on our next cars.

All in all, it’s clear that Saab’s new model of joint development and partnerships is a clear example of how to run a modern corporation. This is exciting stuff, folks.

In other news, Saabs United friend Ray Wert who edits Jalopnik chimed in on a list of 11 cars that can make you cool. A Spyker C8 Aileron got the cover shot:

“The Spyker C8 Aileron is pretty flashy, but its authentic aviation-inspired engineering and design elements keep it in the cool column.”

If that’s the case, I hope Saab really plays up its own aviation-inspired elements in models to come.

There was a short blog post on the values of bankruptcy on restoring a company’s value and its effect on the economy on Forbes this weekend too. It’s mostly an opinion piece, and while I agree with much of it (Saab is much leaner now due to the restructuring process), I disagree that certain elements of its liquidation helped. I’m not sure how much the author knew or cared about the details of the process though, as he refers to Victor Muller’s company as Stryker.

An article on Wards Auto explains the various challenges Saab is facing as it tries to boost its sales in the US. It’s actually a great read and the best summary of what’s going on in the US market I’ve seen since Saab was sold and I think everyone interested in a fair and accurate assessment of what’s going on should read it. Several dealers who are friends of the site are quoted, check it out. My main confidence booster:

Saab spokesman Chris Wiseman tells Ward’s a market-specific plan for promoting the auto maker’s products in the U.S. is taking shape, closely involving dealers and a variety of mediums.

“We’re working on a plan of attack,” Wiseman says.


In case you missed this viral video on the interwebs, a very bored guy tried to recreate the famous Lexus commercial from 1989 where an LS cruises past 140 mph on a dynamometer without toppling a pyramid of champagne glasses. Lexus’s social media department caught wind of it and created their own video to show exactly how it’s done (you have to level the glasses first, doh!). Either way, as much disdain as I have for Lexus, this kind of quick reaction actually impresses me. It makes me even happier to have Swade as Saab’s new social media guru, knowing he is tasked with making sure all Saab owners and fans worldwide feel like they’re the company’s #1 priority going forward.
––
Speaking of Swade, he’s reached celebrity status on thelocal.se’s site:

Not to be outdone, TimR’s getting in on the action too at ttela.se (english version). 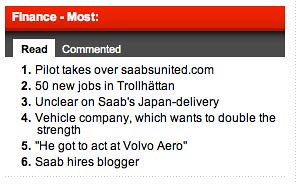 We’re lucky that the site is in such safe hands with Tim. I couldn’t be happier to be writing for SaabsUnited, and working with such committed writers. Even though we’ve hit some turbulence with our new server, we’re working on it and I can tell there are smooth skies ahead. Enjoy the flight.