Hi Robin,
I would just like to share with you photos of my 2009 9-3 TiD convertible which I just got back today after it was in my local Saab service centre for the hood to undergo “renovo” treatment. They have done a great job and the roof is now back to its former shade of blue, decided to get a full valet done as well…and to top it all, took advantage of the 10 day free trial of the Hirsch upgrade.
I hope you will consider it as a possible contender for SOTW sometime in the future… 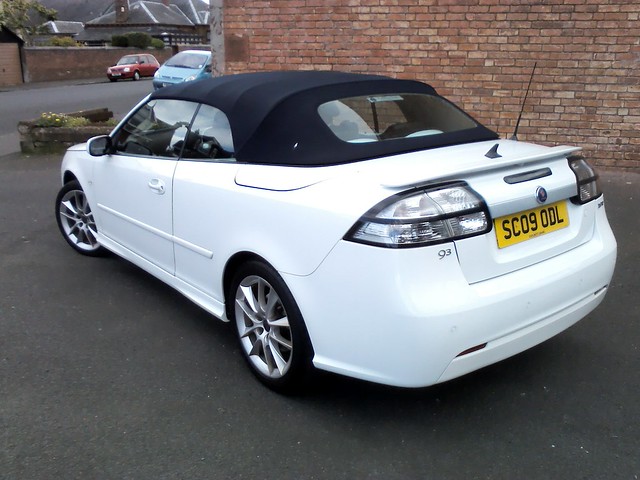 I met Tim earlier today just before he was to return this beautiful Saab 9-3 Aero Griffin .. And how lucky that both the sun shone and I had my camera with me 😉
Update nr10 is all about More Photos!.. after the jump.. We mentioned this in a post a week ago, but the episode hit the interwebs a few days ago and is up on youtube for all to see. Owning a 9-3 SE myself, I found the show not only entertaining but extremely informative.

Watch the episode below to see what kind of profit they made.

As you may guess from the title, there are a few photos and bits from the SOC in Aurora, Ohio from late last month still rattling around my hard drive, yet there are a couple of other items, too, so it’s a snippets entry.

Over this weekend I had the opportunity to witness first-hand the reason that Australians coined the term “whinging pom“. That’s another story for another day. (Bonus whingeing.)

First up, this is either the most positive Saab 9-3 Aero Convertible test ever conducted, or it’s the most tongue-in-cheek lampoon of the brand ever. I had to choke back the laughter with that hat. It’s like a coonskin cap, only bigger and more furry. To what animal did that skin belong? Translations (Kroum?) are welcome.

Seriously, the video appears to document a great demonstration of the cold-weather capabilities of Saab convertibles.  It just looks a bit odd to us in the West.

More New York Times print for Saab.  It’s just a short blog entry, but the New York Times is the New York Times.  We’ll take all that we can get.  The entry takes a little issue with the Muller-stated break-even point of 85,000 units per year.  Hey, there are no guarantees, everything is dependent upon execution, efficiency and economic climate.  The point remains that Mr. Muller, JAJ and company have a realistic target and a realistic chance for success.  They don’t have to be a 1,000,000-unit marque to survive.

More (people) photos from the Saab Owners Convention 2010 after the jump.  Great to see everyone.

Saab have just announced via the Newsroom that the 9-3 Convertible has joined the Sport Sedan and SportCombi in getting the TX treatment.
Going from our last entry on the TX edition, it comes with the following gear:
The Turbo Edition model in the UK see you get the following kit as standard:

Upgrade further to the TX edition and you get a bunch of Turbo-X inspired goodies added into the bargain:

That’s a pretty nice offering, actually. Much like the 60th Anniversary models from a few years ago, these should be selling in good number. Here’s hoping.

There’s the right way to combat the growing number of black/silver/white vehicles on the road, and then there’s the wrong way. If you’ve been hanging around this site for a prolonged period of time then you’ll know that painting cars pink is not considered the right way.
This is a Mary Kay cosmetics fleet vehicle spotted recently in China…..
Click to enlarge.

There was some scuttlebut a little while ago that maybe Fritz Henderson was reluctant to sell Saab because he knew how good the upcoming range of cars was going to be.
Whether true or not, Fritz is very familiar with Saab being an ex-GM Europe guy, and is reputed to have a soft sport for GM’s Swedish brand.
So when he was asked during a Fastlane chat what’s currently in his garage, it shouldn’t have been a big surprise to see one of Sweden’s finest….

I think it was Bob Lutz who said “We love Saab at GM. Our wives love driving them” so maybe Fritz isn’t driving the Saab himself.
But I’d like to think the other two cars are there because they’re expected to be there and that when no-one’s looking, Fritz heads for the ragtop.
——
Thanks to LotusEnthusiast
And sorry things are slow. I’m making a movie 🙂

Over the weekend I published a story, which included some preliminary information about the Saab 9-3 Convertible production moving from Magna Steyr’s facility in Graz, Austria, back to Saab’s own factory in Trollhattan Sweden.

I have recently received some updated information from Saab themselves about this, reproduced below:

An agreement has been made with Magna Steyr regarding production of the Saab Convertible. The last Saab Convertible will roll off Magna Steyr’s assembly line in Graz in December, after which time all Saab Convertibles will be built alongside the current 9-3 and 9-5 models at our state-of-the-art manufacturing unit in Trollhättan.

Jan Åke Jonsson said: “We have a world-class production facility in Trollhättan and there is scope to increase the number of cars we produce there. Moving Convertible production to Sweden will allow us to further utilize the plant, reduce costs and safeguard jobs.”

He continued: “We have been extremely satisfied with the quality, professionalism and service that we have received from Magna Steyr over the last five years, but the time is right to bring our Convertible home to Sweden.”

Saab Automobile produced its first four-seater Convertible concept car in 1983 and the production version was revealed in 1986. Since then there have been more than 250,000 Saab Convertibles sold. Designed as a true four-season, all-weather soft-top the car has achieved iconic status and in 2008 it accounted for 12% of the European premium mid-sized convertible market

So now you’re up to date!